A Taste for Life Media Advisory 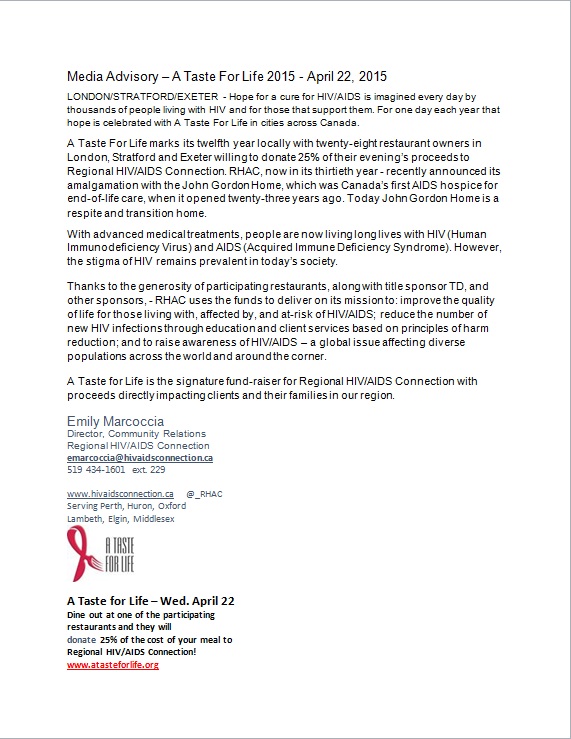 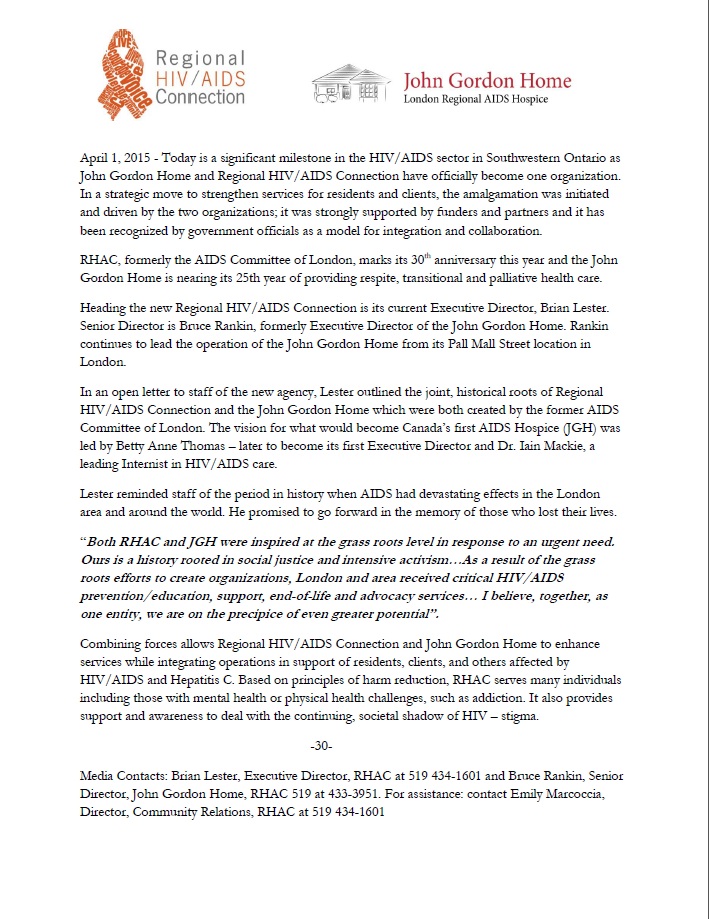 Please click HERE for a PDF version of this release.

this is to advise that every Thursday from 2-4PM either a Hep C Nurse or Nurse practitioner will be available at Regional HIV/AIDS Connection to support Hep C testing, wound care, etc.
No appointment is necessary. Clients will be seen on a first-come-first-serve basis.

This service will not be available until March 12 2015.
Thank you for your patience and understanding.

Please be advised that the lift at the South entrance (main front doors) is now back in service.
All building access are now fully functional.

Thank you for your understanding and patience while we underwent some technical difficulties.

The role of the Housing Selection Worker shall be to obtain appropriate private sector housing throughout London for individuals transitioning from experiencing homeless to housing stability. In addition, the Housing Selection Worker will develop and maintain effective relationships and working partnerships with landlords, property owners, and/or property management. The successful applicant will work in collaboration with the London CAReS Outreach and Housing Support teams and report to the London CAReS Managing Director, Case Coordinator and the Executive Director of the funded agency.

Details of Contract/Hours of Work

The Housing Selection Worker primary role is identified, but not limited to:

Knowledge, Skills, Abilities and Other Requirements

PLEASE SUBMIT RESUME AND COVER LETTER IN CONFIDENCE BY 4PM ON February 20th, 2015 :

We thank all applicants for their interest but regret only those selected for an interview will be acknowledged. No phone calls please.

RHAC is looking to recruit men who have sex with men to participate in a brief interview about experiences they’ve had when accessing healthcare.

Interviews will be recorded and edited in to 5-7 minute audio segments that will be used as educational tools with healthcare providers.

No identifying information will be shared, and voices can be disguised if necessary.

We are able to offer participants an honorarium as a thank-you for their time. If anyone would like more information, they can email Wes at wheney@hivaidsconnection.ca

We are recruiting a GROUP FACILITATOR PEER POSITION. 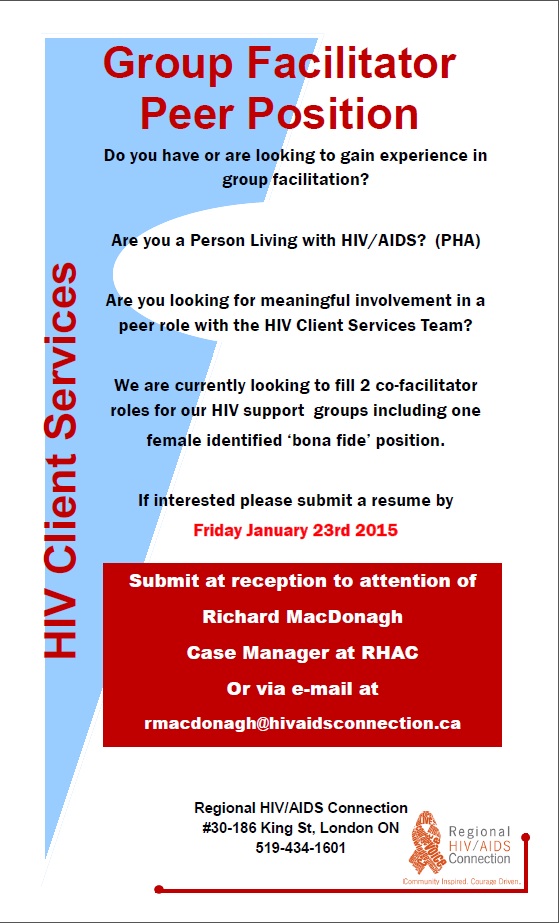 Human Rights; Sexuality, Prevention and Criminalization of Non-disclosure of HIV

The researcher is hoping to interview 50 HIV positive women and men across Ontario.

He is Christopher Tatham and is a PHD student at University of Toronto. This research has been approved by an ethics review board. 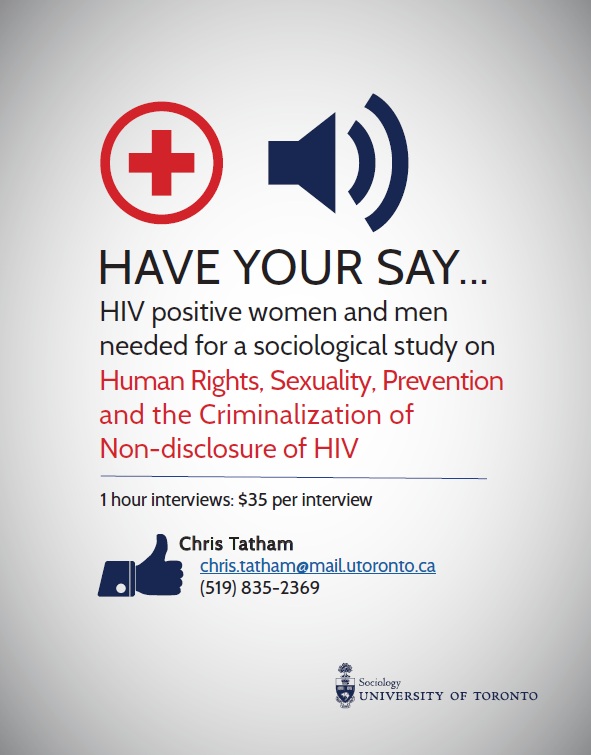 Please be aware that the lift is now back in service.
If you need other alternative accessible access, please enter RHAC via the North entrance (Counterpoint exchange door)
Thank you for your understanding and patience.

London, Ontario - Around the corner and around the globe, HIV/AIDS continues to be present in today’s society and London’s new Mayor will acknowledge this in one of his first official duties on Monday, December 1st – World AIDS Day.
Just hours after taking office, Mayor Matt Brown received a symbolic “Red Scarf” from Brian Lester, Executive Director, Regional HIV/AIDS Connection at 10:30 a.m. in the Mayor’s Office.

The Red Scarf Project, launched by RHAC just three years ago, is an awareness building campaign that has now spread to other communities in the province. Over a thousand red scarves have been made by volunteers and distributed to members of the London community in order to start the conversation about HIV/AIDS during AIDS Awareness Week, November 24 – December 1, 2014.

Mayor Brown has said “I am pleased to show my support for World AIDS Day. Not only is there major AIDS research taking place in our City, but London is also the hub of HIV/AIDS prevention, treatment and support for the region. Despite improved treatment and fewer deaths, there continues to be no cure and we must not forget that HIV/AIDS lives in our community”.

In thanking the Mayor, RHAC’s Executive Director said “behind this red scarf there are many stories about how HIV and AIDS have impacted the lives of Londoners. It is a major issue affecting people from all walks of life, including many who live in poverty. We, at Regional HIV/AIDS Connection, are very grateful when community leaders like Mayor-elect Brown take a moment – on such a momentous day – to recognize this”. 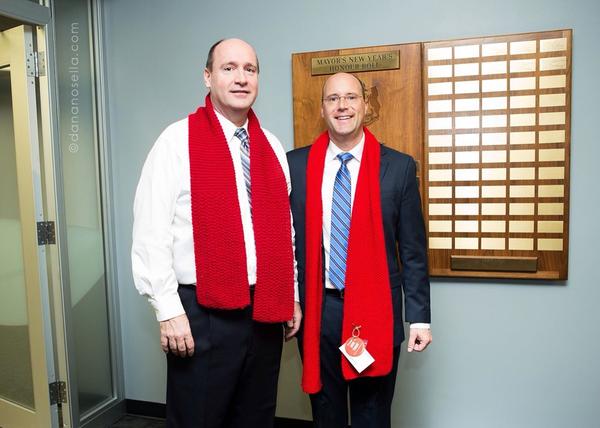